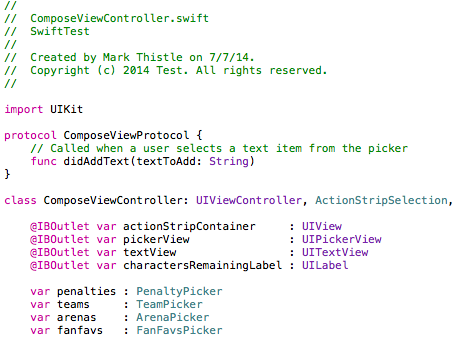 I wanted to learn a bit more about how Swift works and the best way to learn a new language is to start to code in it. The videos and book are great but I need to get the code under my fingertips to start to understand it better.

So, to get some experience with Swift I decided to port my first iOS app, HockeyTweet, from 2009 to a modern HockeyTweet built with Swift in 2014.

First what was HockeyTweet? It was a Twitter app optimized for Tweeting about Hockey games in a time before custom keyboards, auto correction, or enhanced predictive text inputs. So the scroll views were there to help you spell player names, put in arena names, post your favourite comments on the play, etc. It sold like...well, the opposite of hotcakes.

What it did do though, was help me to teach myself iOS programming which meant a leap into front end UI design, a new language (Objective-C), and new development tools. Now after 5 years of programming with Xcode daily, I am a little more experienced. How will that impact learning a new language and porting the app? Let's see.

Here are my notes as I worked on the app over the last 5 days:


What are my thoughts on Swift?


So, after 4 days of coding a total of about 12 hours I have completed the following:


What do I plan to add next:
Philipe Casgrain, my friend from CocoaHeads in Ottawa, put me onto the Summer of Swift. A contest to learn by coding. The idea is to code an app in Swift and do weekly updates to the project over the summer. I am going to enter that and continue to update the app over the summer. Adding back in original features and some new stuff to experiment with Swift.

The code is available to view on Github at HockeyTweetSwift if you want to take a look, grab some ideas, or make the next great Hockey Tweeting App! Ok, that last one is a joke.