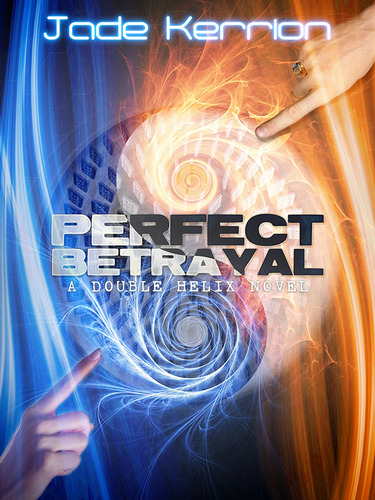 Jade Kerrion's first book in the Double Helix series, Perfection Unleashed, is the next book for the Redmond Sci-Fi Fantasy Book Club. Here are my thoughts on it.

This is like a more realistic version of X-Men with a world that has mutants and genetically altered humans who can use empathic and telepathic abilities. Some mutants, the Alpha mutants, are so powerful their abilities can be deadly.

Thrown into this world are 2 men with the same face. One who does not want anyone to know who he is and the other who is just finding out who he is.

This is an nice departure from X-Men and mutants to a more-realistic (nobody can fly) world not far removed from our own where scientists have figured out how to create genetically superior humans. The problem with this as one can guess is that things go wrong and there are a lot of Pro-Humans who do not want the human race messed with. The Pro-Humans are happy with the way human evolution has gone and will stop at nothing to end this race towards science.

I really felt that this reads like an X-Men mutants with empathic and telepathic abilities, without the X-Men.

I felt that there is a lot of angst by the characters which made me think this would be a perfect candidate for the latest Teen Angst Movie franchises, ie. Twilight, Hunger Games, etc. Most of the characters are in the 20s or younger and there is mention of trying to figure out how to belong and such. I could have done with less of that, if only to save me from the thoughts of, oh hell this would be one of those movies.

There is some nice action in the book. The battles between mutants, mutants and humans, and some super-mutant-creatures are all well done and fun to read. Again here, some of the story falls into, "no escape", ahh, no just kidding, here's a text book comic book means of getting out of this situation.

I did enjoy this book for it's mutant story, political overtures of human vs mutant, and a more realistic "super-hero" fiction. Worth reading if you are a fan of X-Men, super-hero comics, or teen angst (I guess).
Posted by Unknown at 7:30 AM