Teaching My Kids to Mountain Bike

Yes, the title says it all, I am not satisfied with teaching my boys to ride a bike. They must learn the skills of mountain biking. Why? Because I love to mountain bike and so they must.

I know, I know, you are shaking your head saying but because you do it does not mean your kids need too. Well tell that to Football Dads, Hockey Dad's, and this Mountain Biking Dad.

Well, I am not that hardcore, that is to say I encourage the kids to mountain bike and would let them skip out if they wanted too but they are in. So what am I teaching them and how? 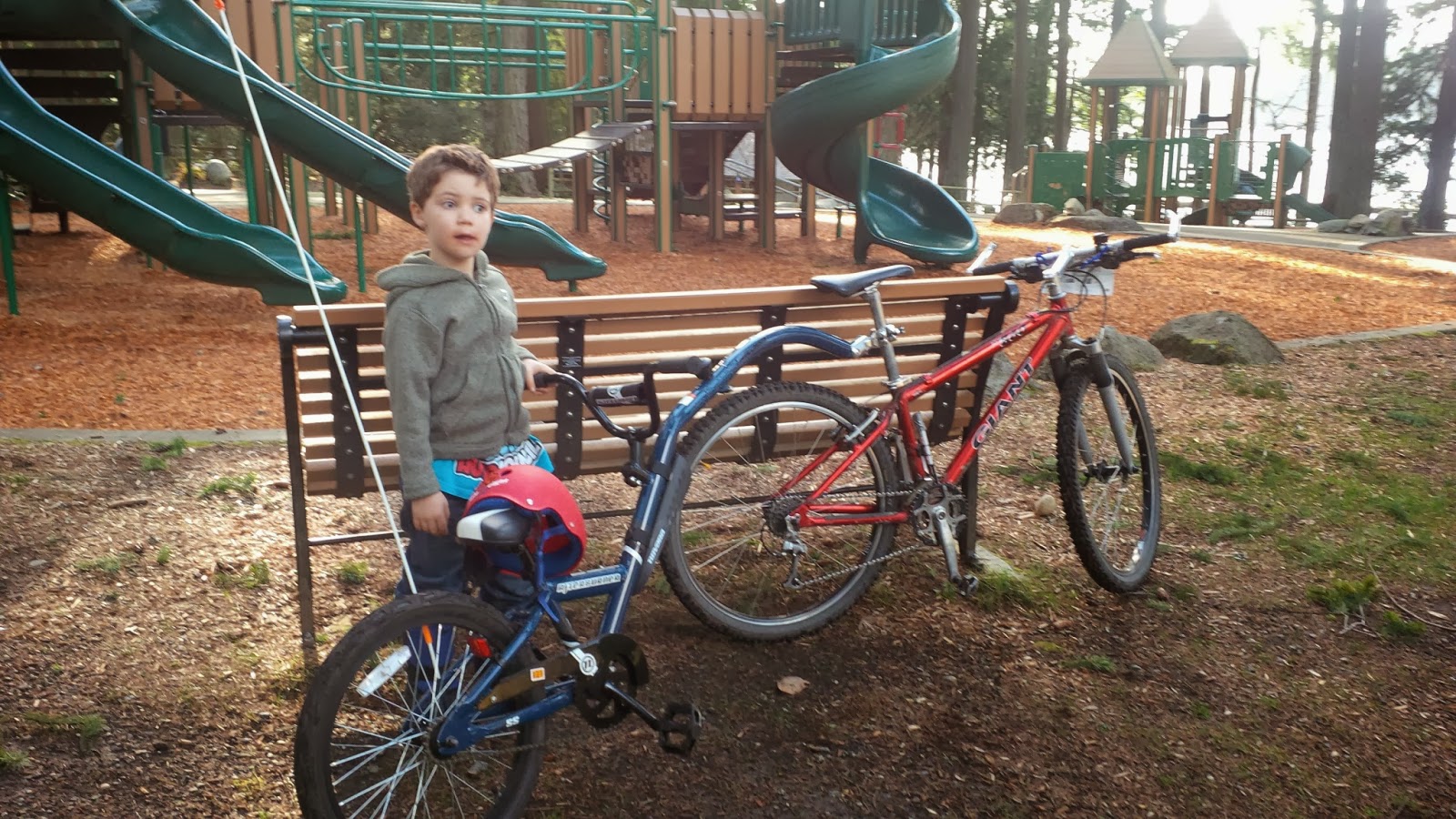 One of the things I am doing is using a tag-a-long bike that is hooked to my mountain bike to take the kids on entry level stuff. This is a fun way for them to be introduced to the idea "Hey, you can ride in the woods."

I started my oldest on the tag-along but now he is self propelled and my youngest is my new co-pilot in the rear seat. We are lucky to live next to a park and a mile away from another park which has some off-road trails. I have moved them up to riding to the park a mile away and then we do the off-road trails there. In total we get about a 4 mile ride in.

My youngest (6) has picked up how to stand on his pedals and do power strokes. He got this from watching his older brother and I. This is great but does have a side-effect. He and I were riding down a hill the other day when he stood and started cranking hard. I was on the brakes already but we were starting to speed up. This combined with the swaying back and forth from his cranking and I had to call a stop to "Turbo-Boost" mode.

The best is that he was totally excited to be able to make the bike go faster, he figured it out on his own by watching, and he is becoming a bigger help on hills. Bonus!

Now if I could just teach him how to find his chocolate foot (dominate food that you like to put in the front when both pedals are level) and start to use the level pedal stance when we come to bumps and turns. We have bounced his pedals off the ground, roots, rocks, etc on many occasions.  It will come with time though. 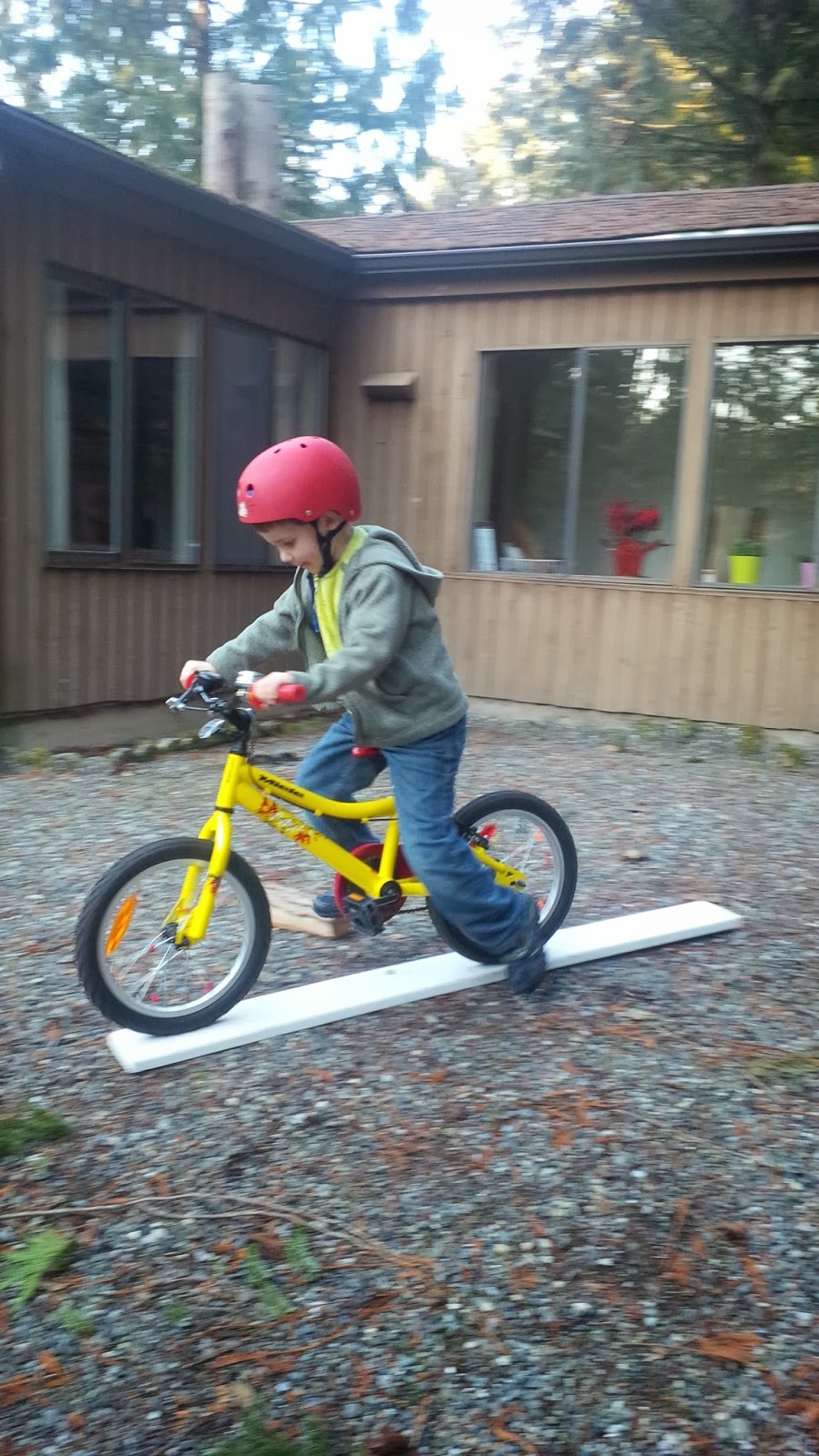 Another skill I have started them on is riding flat boards that are on the ground. I am prepping them for finding their line, controlling their tire, and learning to ride rails. This one will be very good for helping them to develop confidence when they get to the mountain bike park later this summer when I will let them start to ride the planks that are raised up 2-4 inches and are about the same width.

As well, on their own they decided to make some jumps with the boards. They are placing a junk of wood at one end to raise the board about 2 inches. Leave it to boys to find things to jump off of.

I am hoping by the summer I will have the youngest riding his own bike well enough to start biking at the mountain bike park nearby so I can start their training in earnest. Before he gets to move up to that level he must be able to control himself (steering, braking) and build up his leg muscles to climb some of the hills.

By the end of this summer I hope to have created two additional mountain bikers.
Posted by Unknown at 2:47 PM

I'm going to use some of these tips in the spring (it will come), I too want to get on the trails with the kids.

When they are good enough don't forget there is good biking around Ottawa. Try http://ottawamba.org/cms/ for a list of maps.