Hackathon: Writing a Microsoft Band App In One Weekend - Update 2

I imported a sample set I collected of a simulated kayak sitting on the deck. Then I wrote a PaddleCounter class that I can feed accelerometer into. The class calculates the stroke count as it processes the incoming accelerometer data.

This data then needs to be displayed in the awesome UI I cooked up on a budget. Ok, it never cost me anything and it shows, but you get the picture. 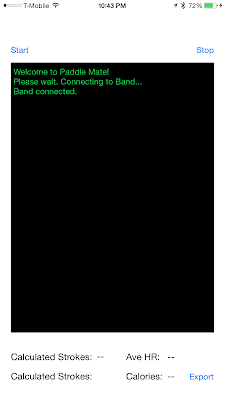 As we can see a couple new features are slipping in. I figure I should track Heart Rate and average Heart Rate for the session. I am also going to collect calories burned and compare that later to calorie burn estimates to see if it is reliable. But I will hook those up later this weekend.

Collecting Samples During a Session


I want to make testing the stroke counter as easy as possible. I plan to collect different samples and track the number of strokes. Then algorithm development will go like this:

My first stroke counter at about 1 AM sucked and came out with terrible results. What to do?


Ok, I was trying to eyeball the samples and hence it was hard to track the trends. So, I need to chart these samples to better understand the data I am getting.

Before I try to rewrite the stroke counter I am puttingthe samples on a chart. For this I am going to use ios-charts by Daniel Cohen Gindi to draw my sample set so I can look for trends.

Here's the new UI with the raw data in the chart and then a zoom in on section:


Ok, now it's time to go hit the water and collect some real samples.
Posted by Unknown at 10:25 AM