James, of Guitar Jam Night, joined a Meetup of Arduino makers, KingMakers, a couple years back.  Back then there were about 50 people.  Now there are over 500 and I finally joined up.

I figured it was time I started to learn a bit more about building electronics since I have so many ideas I want to create which span hardware and software.  So, let's jump in.

I attended my first session on Sunday, January 26.  It was a two hour session on adding a Real Time Clock (RTC) module to your project called Time to Get Wired.

What is an RTC?  It is a battery operated clock that lets your project know the date and time so that between reboots, power outages, etc, you project knows the time to be able to fire events.

I have a couple projects in mind that could use this and it was one of the "things to figure out" that I had on my list.  So, a session on how to do this, including a sample project, and an RTC module was too good to pass up.

Like most Meetups, this one started out with a round table where people spoke about projects they are working on, demoed projects, and asked for advice.  That took about 30 mins and was a nice introduction to the level (beyond me) of projects the group is working on.

I took my 8 yr old son with me with the direction, listen if you want, join me to do the hands on if you'd like, or just read your book.  He read his book mostly but he did listen in to the round table and liked many of the projects.  Once the hands on session was nearing the end and most of us were chatting again he joined in to look at some 3D printed Zelda coins/diamonds that one Maker is creating in place of poker chips.  My son got to take some home so he thought this whole Maker thing is pretty cool.

During the Main Session, Dan Tebbs, the organizer gave a presentation on the I2C (Inter-Integrated Circuit) Devices, of which the DC1307 RTC module is an example of.  The presentation was great, quite a few items were over my novice head but I knew enough to pick up a lot of tips.

For example, the fact that using higher resistors not only lowers the voltage on the line but reduces the amperage being pulled which will result in a slower switching response from your I2C.  This also means lower battery consumption such that in cases where you do not need to have a high bandwidth (fast switching) I2C you can use higher resistance resistors to prolong battery life of a project.

As a software programmer I can find the lack of visibility into my hardware projects frustrating.  You do print statements everywhere to get an idea of what is going on.  This only takes you so far and is a long way from a software debugger.

Enter the Logic Analyzer.  I never knew about these before the Meetup today and this was a tangent on the main session about I2C devices.  The Logic Analyzer we reviewed was the Saleae Logic.  This is an 8 channel analyzer that basically gives you a view into what your circuit is doing.

The consensus with the group was that a logic analyzer like this is much better than an Oscilloscope for probing your circuits.  It is also handy for reverse engineering other IC or I2C since it shows you the digital signals coming from a chip.  The group also felt that no one had worked on a project complex enough yet to need the 16 channel model so the 8 channel model is sufficient for most Makers.

The nice thing is that it is also less than an oscilloscope and has some nice features like recording sessions, setting triggers on high/low line voltage changes, and other things I have no idea of.

The hands on session included sample code, an RTC library, and lots of help for those needing it.  There were sample images of the circuit layout and for those that needed the RTC we were using they could purchase at the session.

The circuit was not very interesting to view, but here it is: 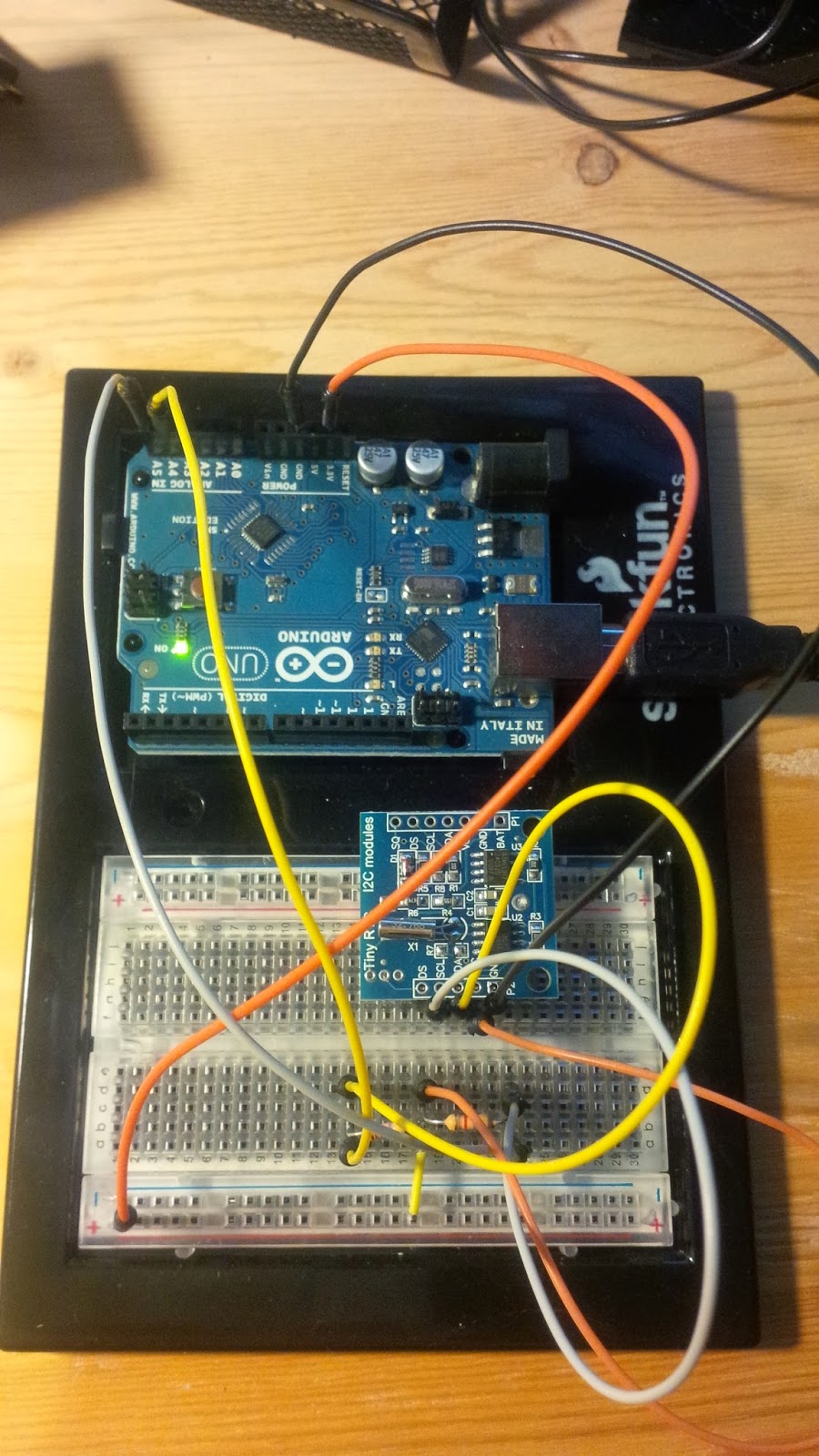 The more interesting bit was the serial output from the RTC:

¥ RTC is NOT running!

How I Plan To Use A RTC

Here's some ideas of how I want to use an RTC in my projects:

I love that people are passionate about their hobbies.  I am one of those people.

I love that one way to learn more is to teach others.  Dan and the other Makers today were a great source of information and were all welcoming.

If you are interested in a topic you should check Meetup.com to see if there is a meetup in your area about the topic.  Else, maybe you should start one.

As for the Redmond, WA area, if you are interested in Arduino and Making then you should check out the KingMakers.
Posted by Unknown at 7:30 AM