My 5 year old is really into my instrument building and he wants to be just like Dad. He has also been asking for a guitar for a long time.

At first I wanted to jump in and get him a guitar but I know kids; who's interest can quickly wane. So last year we tried music lessons. He did not have the attention span for it and so he did not get a guitar last year.

Flash to the last few months and I have started building various stringed instruments. With that and all the guitar playing I have been doing he has been wanting a guitar again.

First I built a Diddly Bow with him, which he played on and off. That worked out well so I built the Canjo with him (a Diddly Bow with a can at the end to resonate the strings). He loved that. 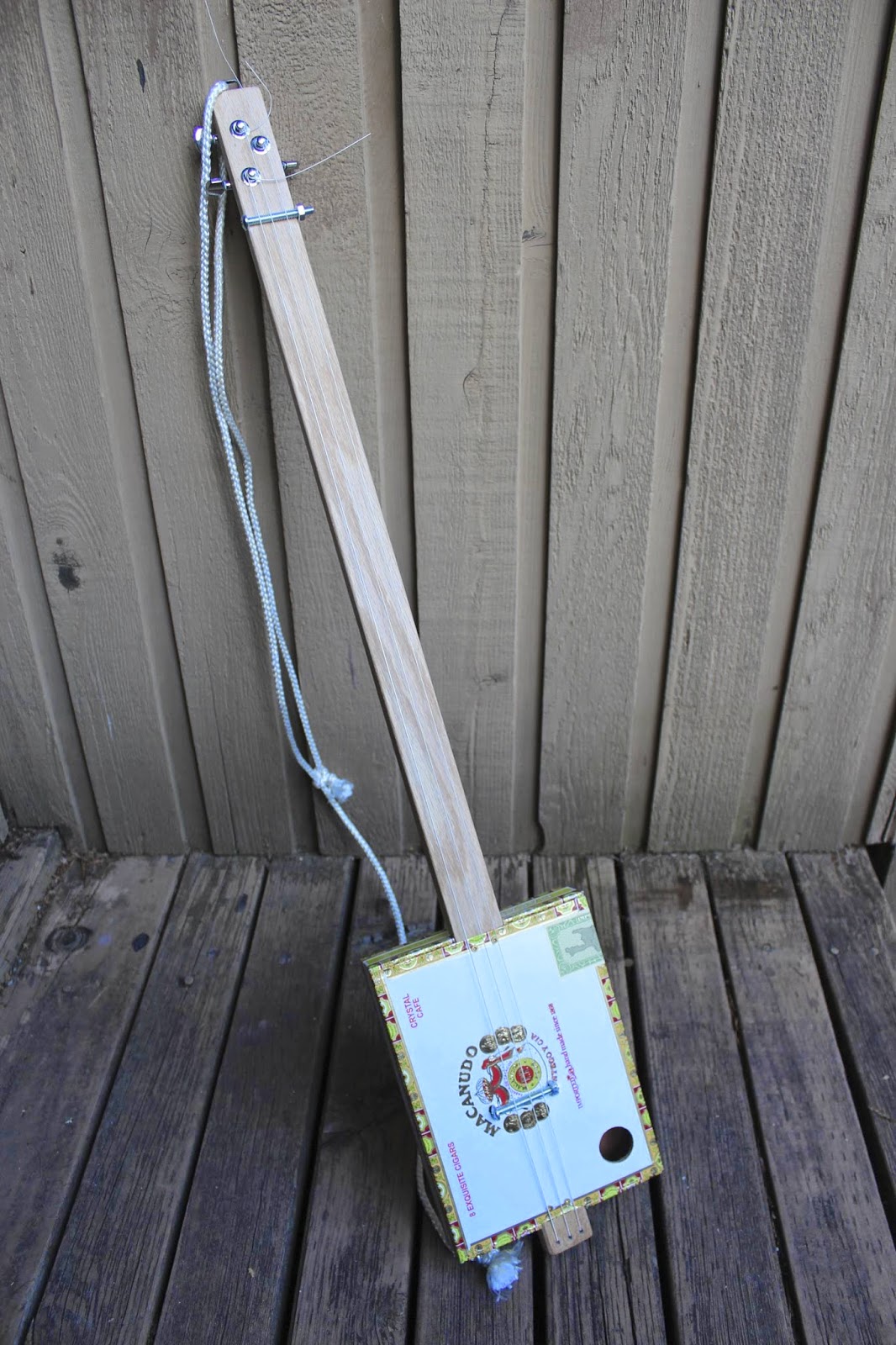 So, with that it was time to build him a Cigar Box Guitar. We built about 50% of it together on Saturday, planing, sanding, and drilling together. Then on Sunday I finished it off for him.

A trip to the Music Store to get some soft acoustic strings and now he has a Open A tuned Cigar Box Guitar. This will work well since I plan to teach him "Little Ghost" by The White Stripes as his first song.

Why that song? He loves the lyrics, knows it almost by heart, and it only needs 3 chords (A, D, E). With the Open A CBG that means he can strum open for the A, then the 5th fret for D, and the 7th fret for E. The beauty of the open tuning being that to fret the strings at the 5th and 7th he can use the slide to fret all 3 at the same time. So he can do less fingering at first and instead start to learn about the note circle (A, Bb, B, C, C#, D, Eb, F, F#, G, G#) and how frets work.

To play with the slide though I needed something small enough for his 5 year old pinky finger. So, we went to Home Depot for some copper pipe (tried on for size so we bought the correct diameter) and then I got to building him a custom slide. Those chords should be easy to hit with the copper slide I made for him. Here's the slide being built: 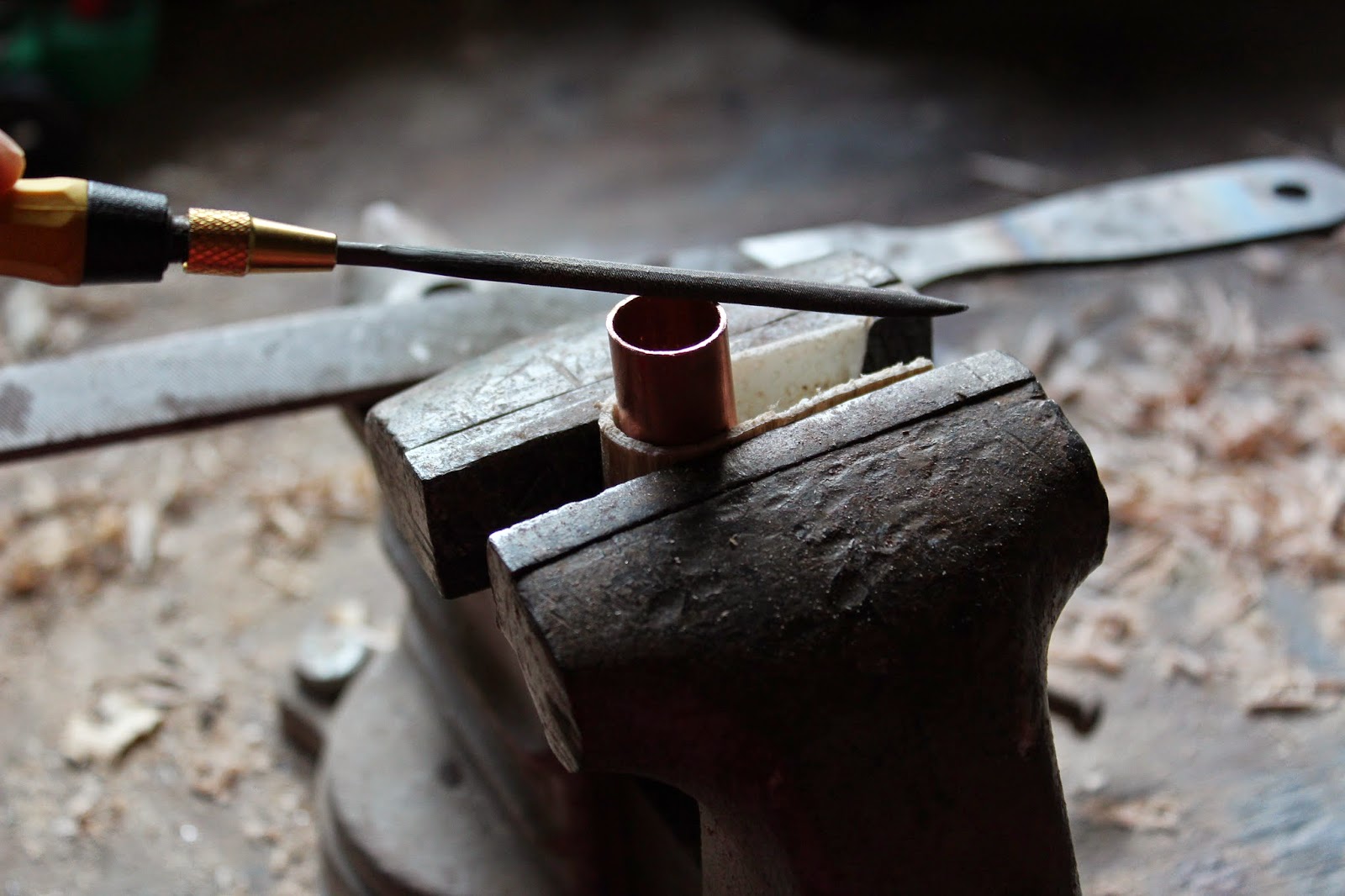 To build the slide I just used a hacksaw to cut one long enough to fret the 3 strings on his CBG, then used a precisions filing kit to file the large hunks of metal, and finally finished the cut ends with some 320 sandpaper. The slide is nice and smooth and a perfect fit for his finger.

So, now we will begin working on learning what frets are and finding the 2 that he needs for Little Ghost.

But first, Dad has to mark the frets. I am going to need to hold off on that one though since he won't let anyone else touch it at the moment. It is his!

With this 2nd CBG completed I now have my sights set on building a Cigar Box Uke (Ukelele) and a Cigar Box Bass. The Bass will be interesting since I will be investigating Piezo Pickups in the bridge. Not sure how to do that yet.

The Cigar Box Uke is another for fun build I want to do. The idea was to give it to my youngest but now that he has his CBG, just like Dad, I think the Uke will become a family instrument. That way anyone can play it. He seems so partial to the CBG.


My youngest does not really like the sound of the CBG plugged in due to it's grainy Piezo Pickup. I think that will be fixed once I get the Boss Super Overdrive pedal which I tried out in the guitar store but have not purchased yet. So, at the moment he does not want an electric pickup in his CBG but now that he knows how I build them (participating and watching a huge amount of the work) he said, "Later I might want to plug it in, so you can add that later for me."

This little hobby started as a way to try out a cheap instrument but has turned into a fun way to teach my kids about creating and building. They are really into the fact we are building instruments and can play songs on them.

Who could ask or anything more?
Posted by Unknown at 8:00 AM