I've gotten feedback about HockeyTweet that goes along the lines:
Kidding aside, why would I launch HockeyTweet with an NC-17 rating? It clearly is just a Twitter client for sending tweets about Hockey.

For most developers and those that follow the App Store saga, the reason is probably clear. For those that don't know let me explain. There is what is called a UIWebView, for non-programmers, this means a web browser view/window in my app. That UIWebView has access to Twitter so users can authenticate and if required to create a new Twitter account. There is a loop-hole in that UIWebView when you are on Twitter that means you could go out onto the Internet at large and view "objectionable material."

Since I allow the user to be able to navigate through Twitter to the internet they could view something that is objectionable. This sounds ridiculous and it is but the point here is that some apps have been rejected due to this and chose the route of least friction in the app review process.

So, yes, the app is rated NC-17. Does it have objectionable material in it? No. Should it be rated lower? Yes, but why would I go the route that has lead other devs to have their apps rejected?
Posted by Unknown at 8:04 AM No comments: 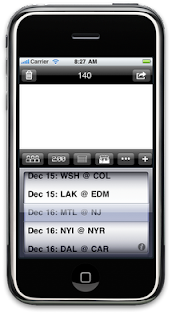 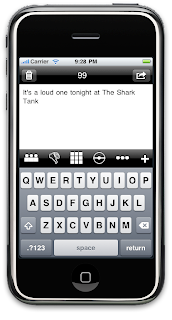 Posted by Unknown at 2:31 AM No comments:

First you will want a way to use the Twitter API. Go get MGTwitterEngine for that (I won't talk about that here since lots of people have explained it well). Get that and install it and play with it. You should be posting tweets very quickly from your app with Basic Auth.

Ok, once you get tweets sending and can retrieve tweets with Matt's code (MGTwitterEngine) you might want to start posting your tweets with your own app name and website. To do this you will need to use OAuth. See the Twitter API FAQ about OAuth and Twitter.

The best way to get this working on the iPhone is to use Ben Gottlieb's Twitter-OAuth-iPhone. This is a awesome piece of work by Ben, piecing together several examples, frameworks, and the OAuth process to make using OAuth from the iPhone a piece of cake.

Follow Ben's readme and sample project and you will be up and running with application branded tweets in no time.
Posted by Unknown at 6:17 PM 2 comments:

HockeyTweet is my first foray into the Apple App Store. HockeyTweet is a Twitter client which makes it fast to send Twitter updates about hockey games in real-time.

Here are some of the questions I've gotten about developing for the iPhone and what my next plans are:

Does it cost money to develop for the iPhone?
Ok, how much does it cost?
Does it cost any more?
What are the tools like?
What is next for me and HockeyTweet?What did you learn technology wise? I've gotten to learn the following (or at least scratch the surface):Is it hard to write an app?Do I have a website?Have I had sales?
Posted by Unknown at 7:37 PM 2 comments:

Phil Casgrain and I arrived today in Toronto via Porter. That was a great decision, Phil got to head into his companies Toronto office for some work and I planted myself at a Starbucks where I did work.

Tonight, thanks to Twitter, we saw that some iPhone Devs from Montreal were in the bar of the Hyatt (where the iPhone Tech Talk is being held Dec 3, 2009) and we headed over to meet some fellow devs. This networking was great, we got to trade some dev war stories, joke about the next great app (can you say a $69.99 web flashlight app? ok just kidding), and talk about many of the topics that have been floating about the internet with regards to iPhone development.

We also got to meet some of the Apple evangelists who will be leading the sessions tomorrow.

Some of the topics we covered included, but were not limited to, how app reviews are handled, the use of static analysis, strategies for releasing an app (be early with just enough or wait for more features and risk being beat out by another app), Square and it's new iPhone dongle payment system, how micro-payments are changing the landscape of the app store market, and more. As you can tell this was a lively discussion since Phil and I were there for only about 2.5 hours.

As a developer this type of socializing was a great experience. It is seldom, since University, that I have been in an environment where everyone is so into programming and are all floating about the same wavelength.

It's fun to roam among your own kind.
Posted by Unknown at 8:54 PM No comments: